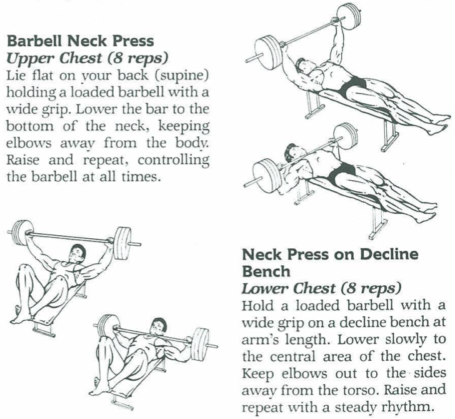 The sternal portion of the chest likely has various neuromuscular compartments that align with fiber orientations.

Therefore, be careful with decline pressing, as it likely builds the lower portion that appears overdeveloped for many trainees.

A flat dumbbell fly would still focus on the sternal head, though with more stress placed higher up across the middle chest.

Barbell neck pressing, also called guillotine pressing, was promoted by Vince Gironda. He said it was superior to flat pressing, which he felt worked mostly the front deltoid.

More than several bodybuilders, even famous champions, ridiculed this claim. So many have attained huge chests at least in part through this classic exercise. How could he be so wrong?

Reading into his statement with context, it’s clear that Vince exaggerated to make his point. Maybe he did think of flat pressing as nearly all front delt work, yet he admitted that it built the chest.

Study the anatomy of the pectoralis major, and Vince’s perspective starts to make sense…

When studying the chest, you’ll notice that nearly all muscle fibers go in various directions obliquely, or not purely left-to-right. 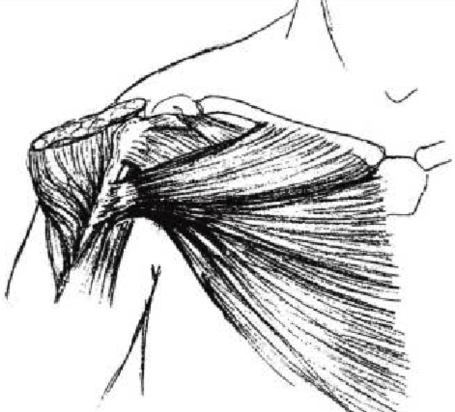 The clavicular head or upper chest fibers angle upward, attaching to the clavicle from the shoulder.

The outermost abdominal or costal fibers of the lower chest attach to their origin and insertion almost vertically.

Finally, the sternal head, though often merged with the costal area to form the sternocostal head, should be treated separately since it has fibers mostly oriented slightly downward instead of horizontally.

The issue with the flat press is that when the muscle is worked at the bottom, the upper fibers are stretched yet the lower sternal chest performs the work from a shorter length.

I deviate from Vince in that clearly the flat neck press has this same flaw, only in reverse. At the bottom, with the barbell at the neck, the lower sternal chest stretches yet the upper portion does the work when pressed straight up.

In both cases on a flat bench, the resistance never directly opposes any large set of fibers.

The incline press, on the other hand, both stretches and works the upper fibers.

How can we achieve this effect for the middle lower fibers that form the sternal head?

I feel that pressing on an incline as well as on a decline allows a better range of movement than flat bench presses.

The decline neck press is clearly the answer, yet if we perform it as usual, by lowering the barbell to the lower chest or upper ribcage, we fail to achieve enough stretch.

Therefore, start by taking a wider grip. Ensure you flare the elbows to both focus on the chest while achieving more stretch through shoulder abduction. Despite the name, lowering to somewhere above the nipples will stretch the chest without excessive shoulder strain.

Furthermore, most decline benches today only allow a shallow decline nowhere near what’s possible with an incline bench. The key is to allow the bar to travel obliquely to align with the fibers. This means a slanted bar path instead of moving vertically, so moving to below the nipple as you lift the barbell.

This clearly requires a free weight barbell, as a Smith machine would force a path that brings similar flaws in flat pressing, and dumbbells would be too cumbersome to work with for most setups.

I get a lot of static over my claim that the bench press is all for the front deltoid. A lot of guys have built big chests with the bench press, but I don’t see much impressiveness in spite of the size.

The decline press, with the proper form described here, will define that reverse-T shape of the lower pec where the inner and lower chest merge.

It’s important to mention that some evidence appears to show that you can develop certain regions along a muscle fiber’s length depending on the length overloaded.

A good example is a dumbbell fly, which not only allows enough range of motion but also has the weight further away from the shoulder at the bottom, an ascending strength curve, making it most difficult here.

Overloading midrange positions, such as when pressing, should maximize active tension for the greatest number of sarcomeres, or the smallest contractile unit within muscle, leading to the most overall growth. These sorts of exercises are rightfully called mass builders.

Anecdotally, bodybuilders use cable cross-overs to develop cross-striations for the inner chest where the muscle attaches to the sternum. They may use one arm at a time to really shorten the muscle. Some studies have shown preferential growth proximally with limited ranges of motion, though this likely just occurred due to hip muscle development.

A decline press would overload the midrange of the sternal head, secondarily the distal region, while still developing the proximal region somewhat.

The inner chest still works, but perhaps not as thoroughly as on a cable cross-over that overloads the shortened pecs when pausing at the peak contraction.

This region may grow due to cell swelling via intramuscular pressure or somehow emphasizing these sarcomeres due to less cross-bridge overlap elsewhere.

Nonetheless, our goal is to build muscle distally for an impressive natural physique, drawing the eye toward wide shoulders and lats.

Pressing allows balanced development that favors the muscle belly and distal region. The inner chest is still worked, just not as greatly as overloading shorter positions.

This holistic approach develops as many fibers as possible toward full development. Without all three exercises, that clear outline will require too much overall growth to bring out.

The middle chest fibers perhaps would be better addressed by flat pressing, but it appears there are fewer horizontal versus oblique fibers when examining the sternal head of the pectoralis major. The flat press certainly builds the chest but not as completely as the decline.

Consider decline neck pressing, more appropriately by just lowering to above the nipple, for sculpting the lower chest. Alongside the other exercises, this will favor the outer and middle chest, while working the inner region enough, for a dramatic pec outline. This achieves a full chest that still draws the eye wide for a classic physique look.