Compared to generating high active tension by working a muscle within the midrange of its length, and generating high passive tension when overstretched, a peak contraction has less value since the muscle is shortened, though not always depending on the exercise.

Nonetheless, due to sarcomere nonuniformity among other reasons, every position throughout a muscle’s length has unique value, though perhaps differing amounts. Contracting muscles while shortened, associated with a cramping sensation, may facilitate cell swelling that leads to additional muscle growth. Peak contractions may also improve the ability to focus on a target muscle due to a better mind-muscle connection while slowing down the movements for greater tension.

In summary, peak contractions can be useful for bodybuilding, and this article is wrong within that context. 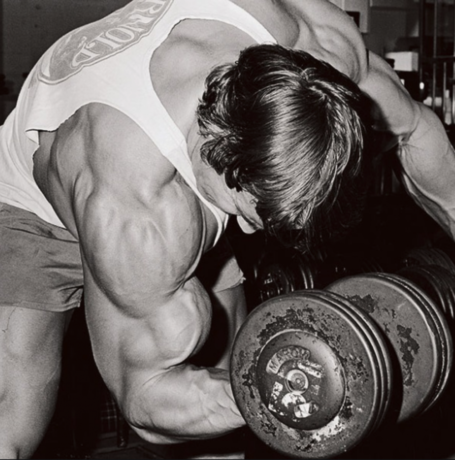 Some experts will teach you to hold the contraction at the top of an exercise. They urge you to apply this technique mostly on isolation or pulling exercises. They suggest you pause here for at least 2-3 seconds and sometimes far longer. They may refer to this as focusing on the peak contraction, with some calling it the peak contraction principle. Perhaps this aims to dignify it. Some authorities have even built entire philosophies around this practice.

On a pec deck, you squeeze when the handles or pads touch each other. On a leg extension, you hold when the knees lock out fully or at least close to it. On a pull-up or row, you pause at the top or when the weight touches your body.

Although leverage may make these positions feel easier or harder versus the rest of the range of motion, any difference in how it feels means nothing. Should you perform a peak contraction, you emphasize a point in the exercise that has no value. Peak contractions will reduce your results and possibly increase the risk of injury.

It’s easier to fool people than to convince them that they have been fooled.

Flex your wrist and attempt to tighten your fist. Notice how you fail to create much force. This occurs since the muscle contraction sites bunch up like a ball of yarn. This happens since the muscles shorten over multiple joints and is called active insufficiency. This prevents much of the potential tension from forming. Tension serves as the main stimulus for more size and strength.

Although usually to a lesser degree, this effect occurs when you squeeze at the top of any exercise. Any perceived intensity comes from the feeling of a cramping sensation that occurs with overly-shortened contractions. You make less tension that contributes to muscle growth. Spending too much time here may even build up fatigue by-products that go toward no good purpose yet end the set more quickly.

This also gives us a reason why many will say a good compound exercise works the belly or center of the muscle. More muscle exists here than near the tendons that attach to the bones. Compound exercises tend to focus on the midrange of possible joint motion, which activates more tension throughout the whole muscle in general.

Exercises that allow a squeeze, beyond the compound pulls, typically are single-joint, rotary, isolation exercises. These have many flaws. They are unnatural despite their popularity. They never belong in any lifting program.

Force exerted far away from the midpoint of any exercise gets wasted on either stabilization and destabilization.

Making an exercise harder does not automatically make it better. In some cases it will, but in other cases it will not. For example, using a full range of motion often feels harder but uses the muscles less effectively. It also exposes your joints to weak positions.

Any increase in the difficulty that happens with a squeeze misleads you.

Some argue that a peak contraction helps you to focus on a mind-muscle connection. Others argue it can address a weak link. These arguments also justify isolation. I argue that the trainee has instead avoided using medium grips, stances, and positions on the best exercises.

When you use an unusually wide or narrow grip, even on a good exercise, some muscles and joints handle more stress than the others. This is what really develops weak links. It brings in other problems such as more shearing forces on the joints too.

The lack of feeling some muscles working develops from form issues, not the lack of variety in exercise selection or by avoiding a technique or tip. If a trainee never feels the triceps working on the bench press for instance, they have used too wide of a grip and may flare out their elbows too much. In most cases, their solution is to add arm extensions that destroy their elbows.

Exercises that allow for a squeeze are generally poor anyway. You want to avoid isolation and machines. Machines have many disadvantages. Relevant to a peak contraction though, they may change the mechanics of an exercise to overload the shortened position even more.

Some advocates for peak contraction have more sensible intentions. Perhaps they just want you to slow down. They figure that stopping at the endpoints encourages slower speeds.

Instead, try to strike a balance between moving either too fast or too slow. Move as quickly as possible while staying in control. You should never jerk, yank, or heave a weight. This will risk your safety and reduce your results. The risk in safety comes from sudden, overwhelming forces due to the spikes that occur. Someone that moves too quickly will also lose their elastic energy on the negative phase of the rep. This harms the lifting phase and reduces performance.

Otherwise, move as fast as possible, especially when the reps grow difficult. This actual speed may become slow but the intention to move the weight fast matters more. This will recruit the fast-twitch muscle fibers according to motor unit recruitment due to the high effort. This also slows down the exercise enough to maximize tension according to the force-velocity relationship.

This condemnation of the peak contraction principle also applies to the other endpoint. It makes no sense to pause at the point of elongation, such as the bottom of a squat. If you do this, you again weaken the stimulus. The components that bind together at the contraction sites spread too far apart. This also blunts the pre-stretch which boosts positive strength and has other benefits. This defines some reasons why I caution against moving too slowly as well.

So now you know to avoid wasting time at the endpoints of any exercise. Perhaps you may wonder why should we move at all? Maybe you could just hold the weight at the midpoint? While intriguing to consider, analyzing muscle contraction types shows this as a poor strategy. All phases seem to play their role.

On a good exercise such as a row or pull-up, reach each endpoint but then quickly yet smoothly resume the rep. Avoid squeezing at the top of any exercise. Ignore the peak contraction principle.