Though the deltoid has an ideal internal moment arm relative to other muscles at higher abduction angles, the deltoid is still favored as low as 15°.

Nonetheless, overloading the whole range of motion has value, so conventional lateral raises can still be included.

The lateral raise is among the few bodybuilding exercises targeting the middle or side head of the deltoid.

This version highlights the unique advantage of dumbbells, though value exists for cable pulleys from various positions and unusual setups like cross-body incline lateral raises.

Vince Gironda and Arnold Schwarzenegger provide many of the following tips…

If I have seen further it is by standing on the shoulders of giants. 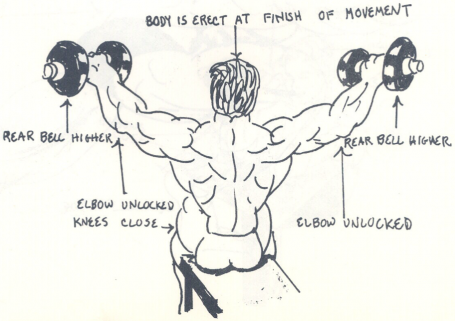 Why the Dumbbell Lateral Raise?

Though usually ignored when evaluating bodybuilding exercises, the internal moment arm of the targeted muscle fibers is important.

An ideal moment arm has these fibers align with the direction of the movement. These fibers take priority over other muscles or fibers involved due to a longer relative moment arm. For the lateral raise, this means the middle fibers of the side deltoid over the rotator cuff muscles or other deltoid heads and moment arms.

The moment arm explains why the dumbbell lateral raise works so well.

The deltoid actually works at a shortened, weaker overall length due to the length-tension relationship. The strength curve has the exercise feel hardest right where this muscle is near its shortest state. Nonetheless, the internal moment arm is optimized compared to rotator cuff muscles with the arms out to the sides.

For healthy shoulders, the deltoids abduct 150-180°. We know that proper scapulohumeral rhythm has about a 2:1 ratio of humeral abduction to scapular upward rotation, meaning a peak angle of 100-120° for the glenohumeral joint alone. This exceeds the 90° most trainees reach today, and you should feel a mild cramp due to the short overall muscle length if doing lateral raises as described here.

This peak contraction at a greater pennation angle for the deltoid may create intramuscular pressure that increases muscle size. Tension likely is not the only growth stimulus. It may even regionally induce hypertrophy at the proximal or upper portion near the humeral head, due to greater curvature of this region.

The lateral raise with dumbbells is among the most effective exercises for wider shoulders, as the primary mass builder, yet no exercise is perfect.

To maximize development of the side deltoids, you need to stress additional moment arms and muscle lengths. 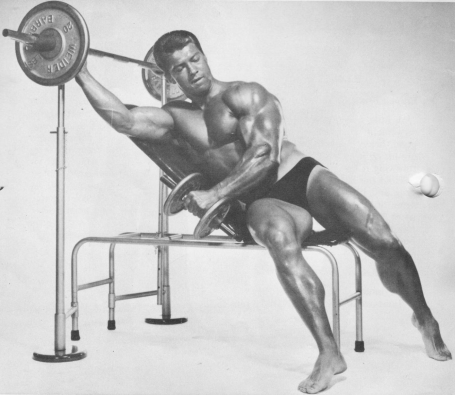 The lying lateral raise likely focuses on the supraspinatus and other rotator cuff muscles too greatly. Their internal moment arms are more favorable than the deltoid at lower abduction angles. Nonetheless, the deep passive stretch possible for the side deltoid could be worthwhile.

As a multipennate muscle, the version described here develops the center of the middle shoulder, and likely preferring the proximal region versus the front or rear of the side deltoid. The rear-side delt tie-in works harder through upright rows, high pulling, or cable lateral raises starting in front of the body. The front-side delt tie-in develops with a cable lateral raise performed behind the body or with a behind-the-neck overhead press.

Vince Gironda also taught a dumbbell swing exercise, which has you alternate from back to front when the dumbbells reach the top, to address the whole side deltoid.

Consider the standing or seated dumbbell lateral raise as described here. It works efficiently due to the ideal moment arm for the side deltoid, and you should strive to get the extra range of motion beyond 90°. For the best possible development though, variety is needed.