The overhead press is an excellent exercise for the serratus anterior, etching impressive detail into the torso. This works best in front, since flexion involves the serratus more so than abduction. A behind-the-neck overhead press works better for the front portion of the side deltoid.

The overhead press also works the front deltoids alongside the lateral and medial heads of the triceps, though without much of a stretch.

From a bodybuilding perspective, the overhead press could never replace horizontal pressing, alongside other exercises, needed for a complete physique. 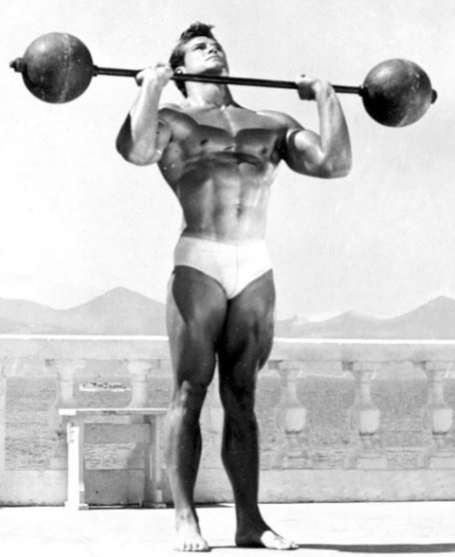 Our shoulders did not evolve to lift weights above our heads. The risk to them is far too great in the overhead press. Other options hit the same muscles better. As a classic exercise though, many will fail to analyze the facts.

The reasons here apply to all variations. Most have the sense to avoid a behind-the-neck version yet ignore that most of the issues occur from the front as well.

The overhead press works the shoulders, upper back, triceps, and many stabilizers. Some call it functional since you can do it while standing. They say that this uses the upper body naturally.

Any exercise that creates tension can build muscle. Add weight over time in the overhead press and the muscles will grow. Just since some athletes include it though does not defend it alone.

It helps to know the history of the overhead press first.

This changed lifting in the early stages of its mainstream growth. The Olympic athletes seemed to know best since they trained with weights almost exclusively. This made them the experts despite the lack of safety in the Olympic lifts. This has also led to bad practices such as explosive lifting and high volume training.

The judges for the sport eventually removed the overhead press. This came from the challenge in standardizing form. The lifters would hyperextend their lower backs to bring in more muscle, contorting their bodies to push more in the sagittal plane.

The bench press then became the most popular push. In the past when laymen would ask how much you pressed, they meant the overhead press. Many old-timers viewed this shift as tragic.

You risk weakness, pain, and the loss of range of motion should you ignore these reasons to avoid the overhead press though.

The glenohumeral joint of the shoulder acts as a ball-and-socket joint. It provides the most range of motion of any joint in the body. This sacrifices stability though.

It serves as the junction between the head of the humerus and the glenoid fossa. The glenoid fossa is a small socket that holds the humeral head. This small space has about a quarter of the size of the head to allow mobility. The rest of the head remains within the center of the fossa. Muscles and ligaments keep it firmly there.

When raising the arm, the humeral head drives into the acromion to cause impingement. Bone and ligaments then add to this compression. This smashes the rotator cuff, made of small muscles and tendons, that fix the shoulder in place. Some are more prone to this though everyone will feel it In some way. The rotator cuff muscles try to prevent this but work weakly overhead and the deltoids take over completely.

You can choose a neutral grip, false grip, or keep a 45° angle of the arm compared to the body. You can force your elbows under the bar and ensure that they do not tuck or flare. You can tighten your scapula muscles when you lift and strengthen them with specific exercises. You can push your head forward and shrug at the top of the overhead press.

Modifying your form while building up certain muscles all fail to change that impingement occurs.

The body aims to use as much muscle as it can for any action. It will attempt to shift your overhead press into a bench press. This causes the spine to hyperextend as the weight gets heavier.

Any movement of the lower back under a load can lead to a serious injury.

The bench press allows your body get into the position it strives to reach anyway.

All muscles work best at medium lengths. An active contraction comes from the interaction between myosin and actin filaments to create tension. This tension then stimulates more size and strength.

When a muscle lengthens, such as when stretching, fewer connections form as the parts spread too far apart. This allows less overlap for the sites to adjoin. If you reach to touch your toes, your hamstrings will feel taut due to the passive tension but will lack strength nonetheless.

This lack of tension also occurs when the muscles shorten too much, bunching up like a ball of yarn. To experience this for yourself, make a fist while flexing at the wrist. You cannot squeeze as tightly as you could with an extended wrist. While this occurs, many connections fail to form as well.

The long head of the triceps stretches too far on the overhead press. The trapezius shortens too much. The shoulders work through too great a range of motion, generating less tension and more of a chance for injury.

On a bench press, the long head of the triceps works at its best length. A row works all three areas of the trapezius well. The whole shoulder works hard if you use both the bench press and the row.

The middle deltoid serves as a stabilizer, meaning it works best with little no movement. We know this since it moves the arm laterally. Slow twitch fibers meant for endurance comprise much of this muscle head.

Its large size comes from the long moment arm between the shoulder and the hand, decreasing the leverage. This long lever makes even a light weight feel heavy when held away from the body, such as on a lateral raise.

The middle deltoid plays its role best with other muscles. A push works the first half of the middle and the front shoulder. A pull works the back half of the middle and the rear shoulder. The whole shoulder works together to remain stable on these exercises as well. Due to less range of motion though, which is best for the shoulder anyway, and since less of the whole shoulder activates as intensely at once, this will reduce the burn you feel.

The shoulder also works as intended any time you hold an arm a bit away from your side. This occurs when gripping a heavy object in each hand with the elbows extended such as on a farmer’s walk. The deltoid prevents your arms from obstructing your thighs while supporting the weight of your arm. It also prevents dislocation.

You do not need to add this exercise, but it demonstrates the middle head of the shoulder’s main role as a stabilizer. Daily life works it more than you may think.

Some state that the overhead press balances the anterior of the shoulder. If you have a horizontal push and pull then this already occurs. These work more muscle too, leading to other benefits such as the indirect effect or changing hormones for the better. They are much safer too as long as you avoid too much range of motion, the real culprit that leads to problems on the bench press.

The upper chest and the front of the shoulder may act as a shelf for the barbell on the overhead press. This compresses the active muscles, which can damage them.

Just because you can place your hand overhead fails to show that you should do so with a weight. Many muscles evolved just to move fast or hold positions. Performing otherwise will go against what your body expects.

Consider an example with the hip flexors. When you run, raising your hips demands a fast action while handling only the weight of your legs.


Moving your hand overhead exists for repositioning the arm against little weight. You cannot handle even this for very long either. Talk with any baseball player or gymnast to learn about the stress their sports place on the shoulder.

It can feel fun to push overhead. A heavy overhead press no doubt looks impressive, even more so given its rarity. These reasons should not carry more weight than your health and fitness though.

When you get hurt while lifting, it can alter your point of view. You may start to value the basic, less applied science over the sincere but poor advice of fellow trainees. Arguments by popularity and tradition fade in value.

Most have the point of view that you must judge each exercise as an individual. Others feel that some movements, by their very nature, will harm us all more or less. The basic science supports this latter stance.

Olympic weightlifters must use it to train for their sport. Their unique demand does not make it a good recommendation for everyone.

Avoid including aspects of training from various sports in an attempt to gain the qualities those athletes have. Athletes succeed since they have natural ability and dedication. You cannot just swim to obtain a swimmer’s body. The best will appear and function a certain way as competition removes those without the ideal genetics.

Though you may get lucky and not get injured, you still take a risk with the overhead press. Injury can happen from overuse and not just suddenly. You may have harmed your shoulders over time already.